'SUPER FREAK: THE LIFE OF RICK JAMES,' BY PETER BENJAMINSON, IS CONSTANTLY IN THE NEWS

Another Favorable Review of Super Freak
BUT I NEED YOUR HELP. This review contends that Rick sued M.C. Hammer over "U Can't Touch This" and I wrote in the book that no such suit was filed. Has anyone seen an actual copy of the suit? I promise a free autographed hardcover copy to whoever sends me a copy of the alleged suit.

Rick as he might have appeared while listening to himself being discussed on WNYC.
RICK AND I ARE INCLUDED IN NATIONAL BLACK HISTORY MONTH AUTHOR VIDEO.
Although I'm not African-American myself, I do write about African-Americans, and the National Black Book Festival was kind enough to include me and my Rick James book in this Black History Month Author Video. Please click the hypertext above to view the video.

RICK JAMES BANK ROBBERS CONVICTED; COULD DO 40 YEARS IN THE SLAMMER FOR IMITATING SUPER FREAK.

It's not clear why either man thought bystanders would confuse them with the late great Super Freak, who died in 2004, or why anyone who hadn't snorted too much Peruvian Marching Powder that day would have thought Rick had suddenly cloned himself for larcenous purposes.

Perhaps Jett and McKissick would have avoided arrest and prosecution had they worked their way up in the music industry like Rick rather than taking a downhill turn on robbery road. 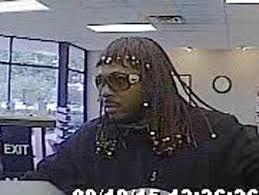 Rick James Imitator Robbing a Bank
DONALD TRUMP HAS RICK JAMES-ED ALL OVER AMERICA'S COUCH
In office less than a week, President (gulp) Trump was already wreaking havoc. In his first full day playing president, Donald Trump withdrew the United States from the Trans-Pacific Partnership, issued a hiring freeze on the federal workforce and took federal funding from all nongovernmental agencies that perform abortions. In subsequent days, he pushed for the controversial Dakota Access and Keystone oil pipelines to continue building on sacred Native American land, and ordered federal workers to begin building that wall. Rick would NOT be pleased. 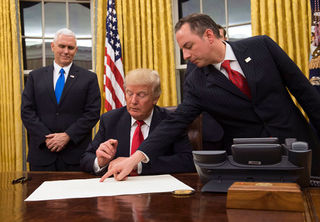